I’ve got to get back into the habit of posting on here! I say this all too often, and while I don’t think updating on a daily basis worked out for me (Burnout much!) I do think posting more often than every two weeks needs to happen. For my own sanity if nothing else.

So, what’s been going on in the world of Fangirl? 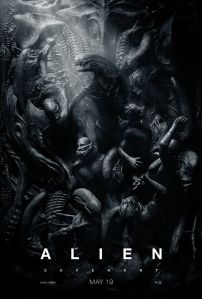 I managed to see Alien:Covenant, and my goodness was I impressed! I am a little late to the party here, but that’s what happens when you have children, so the showing at Beverley ParkWays Cinema was rather on the quiet side, which actually suited just fine!

The film itself was really good and brought up some interesting conversation when we went to the pub afterwards! Finding out who created the much loved Xenomorph was an eye opener and the reasons behind it too. It actually makes a lot of sense to me now as to why the company is so obsessed with them beyond the whole ‘This could make an awesome weapon’ reasons. I don’t want to say too much about it all because I am not one for giving away massive spoilers! But, fi you have an interest in the franchise then I say go see it wth as much enthusiasm as I can muster! Look for the links and remember your lore/history and we could probably have a discussion about how we think the next installment is going to go?

Seeing Alien: Covenant has brought up the rather supressed desire to do more within the Aliens Fandom again, write some fictions, draw some stuff and all the usual fangirly stuff that I used to partake in. Yet, at the same time, I am still tempted to keep myself away from everything like that.

I recently had some drama come up on my twitter account for my furry art, nothing overly interesting – I commissioned someone to draw a picture for me and one of my mutuals left a compliment on it (In a round about sort of way) that they took offence too. The artist tole me theyd be uncomfortable working wth me again if my friends were to leave such comments on her art. As though, I can actually control what people put and have the same opinions as everyone I speak too? Wait a second here? I paid you to draw a character of mine. That doesn’t make us friends! And, why message me about what was written, surely, it’s the person who wrote it you should be telling off… not me!

I just, feel like giving up on this whole art thing online. Everyone else seems to have the strength to just, up and leave it behind at some point in their lives. Why can’t I?

One thought on “Alien: Covenant and More Drama”