View all posts by Jenn

Today was the local Games Workshops Store Birthday, which is always a fun treat. Usually featuring a heap of cake and fun games for those that want to be involved.

Earlier this week they announced something that really piqued my interest. They had some Eldar Sketchbooks on offer. A limited edition art book (which I already have a weakness for) for £30.

So along I popped and I was lucky enough to grab one of the few remaining copies.

Eldar are one of those armies that, although only have a very small force, I find absolutely stunning. The vision and uniqueness of them is just wonderful and the Sketchbook is no exception to this. It’s filled with concept illustrations by Jes Goodwin of pretty much every sort of Eldar that you can think of; and even some that you probably can’t.

Particularly inspiring, for me, was the Eldar Bonesinger sketches – I am pretty new to the Eldar series of models and all mine belong to the realm of the dead – so I was rather unaware of such a pretty looking model idea. I also enjoyed seeing the development of ideas as it’s all in here, from the loosest spark of an idea to the refined creation. 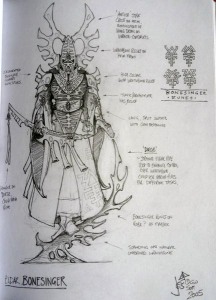 Also, seeing the translation between sketch and model is pretty impressive in itself. Even in the sketches that I’ve seen so far, I am thoroughly impressed by the translation – even without knowing every model in Games Workshops Range. Seeing them faithfully taken from sketch to miniature can’t be an easy feat, but with the aid of Jes’ sketches they’ve made it look effortless. 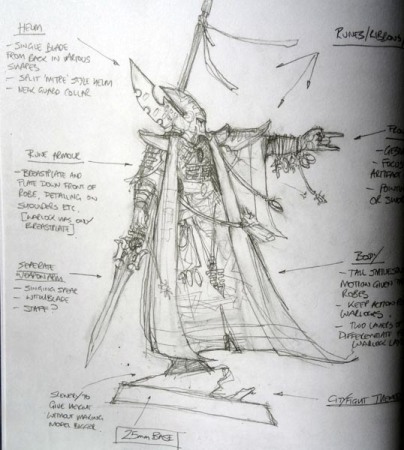 If you’re looking for a highly glossy, full colour illustration book – like the Horus Heresy Art book offerings – then this really isn’t the Art book for you. The hint is in the title of the book there really! It’s a sketchbook. Full of sketches. No colour. However, if you like seeing how characters are created and ideas developed; as well as world building then give it a go, if you can get a copy. Also, if you like Space Elves, then yeah, this book is right up your street. However, I’d avoid if you’re a fickle army collector as this is a very inspiring book and will make you want to pick up a few of the prettier Eldar models.