View all posts by Jenn 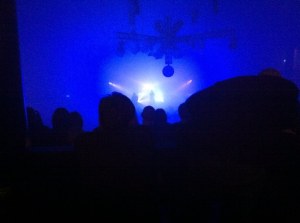 I rediscovered something this weekend. Music. I’ve not listened to it in a while, unless it’s in the brief trips we have taken in the car – which was hardly fulfilling.

It’s amazing how much of an impact music can have on your moods. Lately I admit I have been feeling a bit low and had feelings of aimlessness. Not an altogether pleasant feeling, but over the weekend I was lucky enough to be able to go to see The Siters of Mercy at The Ritz in Manchester with my own sister – who is much more of a megafan over the Sisters of Mercy than I am. It was a lucky find of a gift for her birthday, and as far as I know she had a blast!

I confess, I didn’t know all of the songs that they performed, but had a good sing song and a bit of a jig about to the ones that I did. But even watching them performing the songs I didn’t know I felt my soul filling up a bit more than it has done in recent weeks. I kept remembering little snippets of writings that my sister had done when she first got into the Sisters of Mercy and recalling how everything used to feel so free and easy – maybe that’s the influence of music on art?

I know the photographs I have are nothing next to terrible and are mostly of nothing but silhouetted crowds and vast quantities of dry ice, but they’re my little momentos of the night.

So, I’ll have to bare in mind whenever my moods feel a little dour again and I’m feeling uninspired or stuck to put a CD on and give it a listen it seems to have done the job pretty well so far. Just a shame that I forgot about it until now.