I don’t know if you’ll see the image properly. Honestly, it’s a pretty bad scan in the first place; but I thought it was the perfect starting point for explaining the idea behind Sea of Souls (Name is a placeholder) – I may need a cup of tea for this one, bare with me.
—
So, tea in hand – not literally – I am ready to explain this mammoth of a thing.
The “story” (lets call it that because I don’t know what else it is). Starts with the breaking of a portal and the destruction/death of one third of the world thanks to what broke free.
The portal tender is a young boy called Ethan Russo.
Portals in this are not the usual type that would be expected; they are a part of the person who controls them. 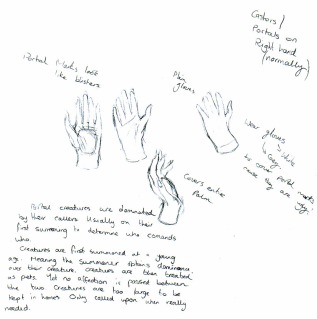 Ethan
Ethans portal manifests almost instantly and he is unable to control it so the nightmare demon – Severance – breaks free and wreaks havoc.
At the same time Skaejre – (A shamanistic character – An anthropomorphic rat-type character) meets Sabastian (A mage) and saves his life instead of takes it. She is a Soul Forager – they hunt those who’re close to death so that they can add the essence of life left to extend their own. They constantly live on borrowed time. She see’s the mostly insane mage for the use that he could be to her; tells him the the life he had was forfeit and now belonged to her. 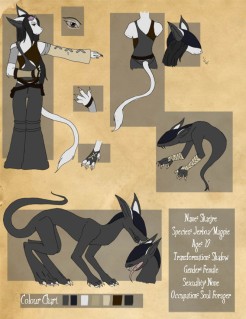 Skaejre Reference sheet
One of the next marks is Ethan; but there is something amiss about Ethan, once the boy explained what’d happened with Severance, Skaejre came to some understanding and took it upon herself to demand that he correct the mistakes that he’d made.
Thrown into the mix is on Captain Farrell, the Captain of an Airship – or he is meant to be his crew are in mutiny after finding out about his Dandarian Heritage. 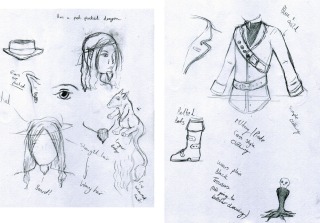 Farrell concept work – I remember this character being a pain to draw right!
I think the rest of the story was more or less about the hunting and killing of Severen/Severance – who I sadly never did any work on.
Since writing the first part of the story another part came about, and more characters were developed to become involved with the project to give it more layers and depth. I know the Templar character Everard completely changed the world when he became involved – but I never got to design him. He made the world in the heat of a civil war (Not personally) with Ethans faction against his. I have a few notes on this, but it’s still fairly open.
I’ve also worked a little more on the Dandarian species, their secular lives and why Farrell isn’t with them and with his airship instead – but again, still needing some work in this department.
It was actually Ethan that was the biggest pain to develop. For such a key character he was an elusive one to get anything concrete down about.
Still
Think this is something that I should pick up again?
Would people be interested in seeing it develop?